First of all, thanks to our spotters, some of which were deployed and some weren’t. Super great folks that are there when we need them.
Second, the day of a storm is not the day to call our center with where do I go questions. These need to be addressed BEFORE any major storm day. We received over 90 calls. At least numbers are going down by several hundred from the last high risk day.
Third, I can’t always answer questions on messenger and all the other little areas that Facebook has created during storms. Just don’t have the time. Based on yesterday’s event, if you had questions that didn’t get answered, please email those to me mike@gcem.org and I will answer them as soon as I can.
Now for today, we are in a Slight Risk area for more severe weather this afternoon. Even though our risk has lowered some, don’t let your guard completely down yet. The attached graph shows we have a very low chance for tornadoes. Storms don’t know about this graph so keep an eye to the sky, just in case. Other risks are large hail and damaging winds. We are also in a flood watch until Saturday morning. We may or may not receive that much rain but precautions have to be taken. Either way, the severe weather threat still exists so we’ll continue to watch.
Here is your forecast from the NWS/NORMAN;
Friday-A chance of showers and thunderstorms. Some of the storms could be severe. High near 75. Southeast wind 7 to 11 mph. Chance of precipitation is 80%. New rainfall amounts between a half and three quarters of an inch possible.
Friday Night-Showers and thunderstorms likely, mainly before 1am. Some of the storms could be severe. Mostly cloudy, with a low around 49. South wind 9 to 14 mph becoming northeast in the evening. Winds could gust as high as 20 mph. Chance of precipitation is 70%. New rainfall amounts between a tenth and quarter of an inch, except higher amounts possible in thunderstorms.
Have a super day!!
MIKE 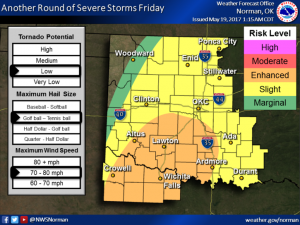 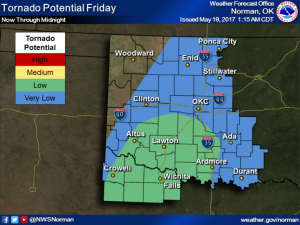 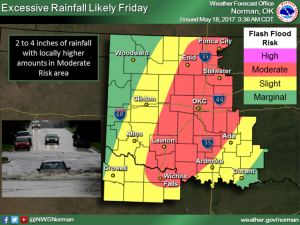