1- 90% chance for showers and thunderstorms during the day. It doesn’t appear we will have overwhelming amounts of rainfall but right now, we’ll take anything we can to get moisture in the ground. As stated earlier this week, we need around an inch or two for the wheat then we can warm up. The wheat looks good and most of the canola I have seen looks good too. We’ll see what today brings other than cooler temps.

2- After this mess clears out later today, near freezing temps are possible across NW Oklahoma Saturday and Sunday mornings and again around mid-next week. We’ll see how this comes out too.

3- Overall, we’ll be ok but remember we are in that transition time where winter and spring fight each other and we just have to deal with it. Just think, in a few weeks we’ll be at 90 degrees with high humidity!! ☹

4- Here is your forecast from the NWS/NORMAN;

Friday-Showers and thunderstorms. High near 51. East northeast wind 10 to 15 mph becoming north in the afternoon. Winds could gust as high as 25 mph. Chance of precipitation is 90%. New precipitation amounts between a tenth and quarter of an inch, except higher amounts possible in thunderstorms.

Friday Night-Mostly cloudy, with a low around 36. North northwest wind 10 to 20 mph, with gusts as high as 25 mph.

HAVE A GOOD DAY!! 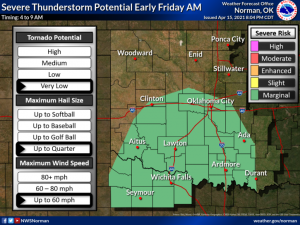 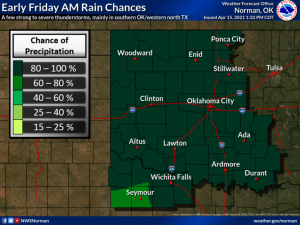