1- Cool and mostly cloudy today without the precipitation. As the cloud cover slowly erodes throughout the day, the airmass in place along with radiational cooling will allow temps to drop near freezing for tomorrow morning. Don’t be surprised if a freeze watch or warning is issued for us and or the northwest. A rain/snow mix is possible late Monday night into Tuesday morning as another front brings colder air into the area dropping temps below freezing. As stated yesterday, a battle of the seasons.

2- Keep a jacket with you and we’ll see warmer temps in the near future. Here is your forecast from the NWS/NORMAN;

Tonight-Partly cloudy. Lows in the mid-30s. North winds around 10 mph in the evening becoming light and variable.

STAY WARM AND HAVE A GOOD DAY!! 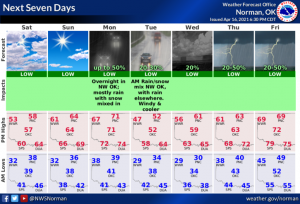